An episode of Dominic Dunne’s Power, Privilege, and Justice that covers the assassination of Circuit Judge Vincent Sherry and his wife Margaret.

Former Biloxi Mayor Pete Halat spent 13 years in jail for using his law office as operational cover for a scam operation that was run from Angola. Halat was also a former Circuit Court judge.

Upcoming articles we are working on here at SRHS Watch:

If you have any information on any of the above or have any other story idea you’d like for us to consider, please drop us a line at [email protected]  or use the below form.

Your name and email address are NOT required. You will remain anonymous.

Saturday Evening Post will become a recurring feature on SRHS Watch.  This is where we take a walk down memory lane to look at the history of corruption in the state and along the Gulf Coast. 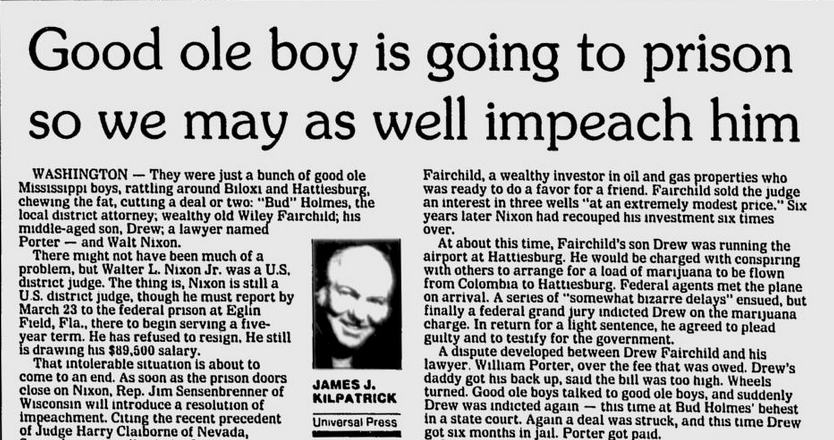 Can’t you just imagine a partner taking his associate along for a ride down to the judge’s chambers? Share some coffee, rehash the National Championship game, talk about how Ole Miss beat Alabama in the regular season, and crack a few jokes.  A few taps on an iPad later and those pesky cases just got stayed. Who cares about the timing? The erstwhile judge already had his mind made up anyways, didn’t he?

What Conway is trying to tell ya, is that it gets easier with practice. Sure, you’re nervous and sweatin’ now, but you’ll be back-slappin’ and glad-handin’ in no time.

An attendee at today’s JCBOS meeting sends in some rough notes taken during Randy Bosarge and Ken Taylor’s questioning of Mr. Guice.  We are informed that Mr. Taylor was thorough in his examination of Mr. Guice and that the questions and answers ranged beyond what is presented below.  We are grateful to the various contributors who take their time to share notes, ideas, and recordings. Without those contributors, this publication would not be what it is.

Some of the notes are direct quotes, some are made in the form of meeting minutes.

On Thursday or Friday I received a communication from the Special Master to attend a meeting at 2:30 at the Special Master’s office.  A meeting where Judge Hilburn will attend to discuss the Special Fiduciary and pending action in US District Court.

Meeting was to be with the Special Fiduciary, Reeves, myself, and Brett Williams with Singing River.

Meeting called by Special Master was consistent with an order earlier entered allowing ex parte communications with the Court and the special master.

Court has used me to communicate. Celeste Oglesby was present at the meeting.

There was limited discussion related to football and jokes. During the course, Judge Hilburn arrived at 3:30. He entered, sat down and indicated “I don’t’ want to do anything improper, don’t want to discuss motions…”

Guice was asked why he was so quiet, to which he replied he didn’t have much to say.  After he [Judge Hilburn] left they discussed what will happen tomorrow. Judge Guirola will rule on the settlement.

The trust was the intent of the event – but not the content.

Were there any other meetings?  Yes. There were other meetings early on with special master, David Houston, and Guice met under the order for ex parte communications. Guice explained calculations of plain explained actuarial projects etc. He provided the information to the Court when requested to give to special master under the order authorizing ex parte communication.  Guice stated he did this so the special master and mediator would not have to reinvent the wheel – they could not reinvent the wheel.

Lucy Tufts and Cal Mayo played a role in drafting the settlement agreement. Mayo told Guice that “attorneys’ fees given to plaintiffs are not to stand in the way of a deal.”

Guice couldn’t cite the section of the Mississippi Constitution which prohibits funding the pension plan. No one else attended by telephone.

It’s flying everywhere.  Round up time.

Over in Ocean Springs it’s John McKay day, which is appropriate as his legacy on the SRHS Board of Trustees just ended and Scott Walker got out of jail. The Mississippi Pravda reached peak kiss-ass today, but what else did you expect?

District 5 Supervisor Randy Bosarge has issued an open call for resumes for anyone interested in serving on the SRHS Board of Trustees – you must reside in District 5.

At the JCBOS meeting, Billy Guice got called on the carpet for his attendance at the “ex partay” with a couple of judges and a bushel of lawyers. He implicated Celestial Reep Oglesby as also being present.  He claims the “meeting called by the Special Master was consistent with an order earlier entered allowing ex parte communication with the Court and Special Master.”

The Mississippi Supreme Court issued an order to everyone involved at the “ex partay” to file a response by next Tuesday, Jan. 26.  See the order here.

SRHS filed their response in the Supreme Court case.   Nowhere in the response to do they assert the existence of the order of which Billy Guice speaks.

So far Scott Taylor must feel safe ensconced in Ocean Springs’ only gated neighborhood.  The Jackson County Sheriff’s Department has no mention of any reports of threats of arson.

When Singing River voted to terminate the pension plan, that vote also contemplated setting up a new plan. The new pension plan would have:

END_OF_DOCUMENT_TOKEN_TO_BE_REPLACED

Billy Guice entered Singletary’s office at 2:26 p.m. Guice is alone with Singletary for 52 minutes until 3:18 p.m. when Scott Taylor arrives.

If counsel for non-parties to Lay were invited to this conference, surely counsel for KPMG would have been as well. Maybe someone at Brunini or Sutherland can inform us.

I am advised that class certification for members of the S.R,H,S. [sic] Retirement Trust
Is [sic] being sought in the parallel S.R.H.S [sic] litigation filed in the U.S. District Court, Southern
Division. As an aid to federal jurisdiction; [sic] to avoid duplicate and costly litigation and
to allow the benefits of federal class action to inure to all members of the retirement trust
I am ordering a temporary stay in the S.R.H,S [sic] Jackson County litigation effective
immediately.
The importance of a resolution of the S.R.H.S [sic] litigation to the members of the retirement
trust, to the Jackson County hospital [sic] and  to Jackson County is obvious.
The temporary stay, which is now in effect, will require that the hearings, set for tomorrow
( January 13th ), be canceled.
I will provide notice to all parties if, and when, it becomes necessary resume active litigation.