The resolution passed Monday by the JCBOS set a number of balls into motion, one of which could be worth over $3 million for Billy Guice.  Supervisors and their counsel assured the press and public last week that no vote would take place at today’s meeting.  Everybody knows that was a lie. 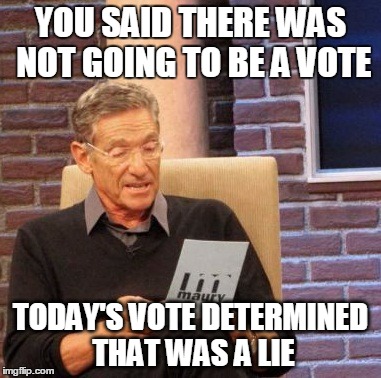 Recall that in June the JCBOS retained Billy Guice to sue KPMG. Guice negotiated a contingency fee of 20% of any money KPMG paid to the county.  Six months later, no such lawsuit has been filed. One  goal of today’s resolution was to create an economic loss for which the county can claim as damages against KPMG – in the amount of $13.6 million. If the fees of the turnaround firm are to be included, this figure could be much higher.  This would put Guice’s estimated fee at around $3 million.  The reader will recall that Guice scoffed at the possibility of certain plaintiffs’ attorneys receiving $6 million in fees, but apparently feels he is entitled to half that amount for work on a smaller and less complex case.

SRHS has already retained the nation’s top litigation firm (Susman Godfrey) in its suit against KPMG.  Much of the heavy lifting has been and will be completed by the hospital’s attorneys. Guice hopes to ride the coattails of Susman Godfrey on the way to a windfall. This is reflected in today’s agreement that calls for Singing River to share all information it has from KPMG and Horne so that Jackson County may expedite its suit against KPMG.

Today’s agreement is a settlement of a lawsuit that was never filed against the county. Let’s repeat: Jackson County is spending money to settle a lawsuit where it is not a party.  The language in the agreement is designed to obfuscate several issues, the main one being the reasons for the agreement.  Guice and the BOS would have you believe that this money is to prevent bond default and prop up hospital financials. They say this over and over again.  These issues will exist whether or not there is a settlement, yet the hospital will not receive any money until a settlement is reached. Everything hinges upon settlement.  This is a settlement agreement by any other name.

We will leave the accounting specifics to Slabbed, but the language about escrow accounts and auditing to prevent the payment of attorneys’ fees is smoke and mirrors. Signing River will receive $4 million from the county upon settlement.  Guice claims that the proposed federal settlement is the same one on which this publication and others reported two months ago. Despite his comments to the press, Guice has now enabled that settlement to go forward. Does anyone truly believe a lawyer would give up the fight so easily unless he were to receive a massive payout?

As attorney Harvey Barton pointed out, the hospital has no money. Any excess funds that come from the county to pay bonds will free up cash for attorneys’ fees.

The bottom line here is that the supervisors assured the public that this vote would not happen and went back on their word just days later.  The supervisors have become so adept at misleading the public, they can easily find themselves believing their own deception.  Maybe those delusions will help them rest easy over this Christmas holiday, as many employees and retirees will not.